Male and female, Birth and Death 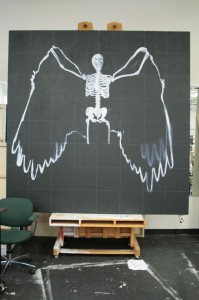 I worked late and finished up Death’s chest and outlined the other wing. He’s going nicely.

This afternoon I’ve been shooting photos for the angel of life, which has gone very well indeed, even better than I had hoped. My model was fantastic, photographs very well, and nailed the pose perfectly. Awesome! I might even make a start on the painting sooner than I had originally thought. I still need to take lots of baby pictures to put at her feet.

Although the symbolism of a woman as the bringer of life is absolutelyÂ self evident, why do I think of the Angel of Death as male? I suppose it’s simply a perception of duality, that we assume the opposition of the angel of life and death, therefore they must be male and female.

But if we think of the angels of life / female and death / male as a duality, what would be the hermaphroditic one thing that enfolds them both? If they are the allegorical bookend markers of life at its beginning and end, the experience of living – being – is what connects and enfolds the two.Â

Perhaps the duality of the two angels for the paintings really should be birth and death, with life as the connection between the two, so I need to rename the angel of life as the angel of birth.

So this leads to another question: if there was to be a thirdÂ allegoricalÂ painting that connected the two by expressing the state of being, what would it be?