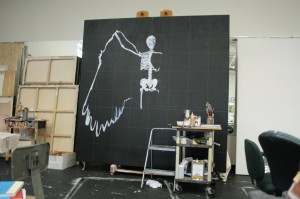 I’ve moved the black panel onto the big easel, because now it has theÂ canvas over it and a couple of coats of gesso on its surface (that’s half a gallon of base) it weighs just a bit too much for me to move easily.

I started painting the figure of the angel, first dividing the panel into a grid of one foot squares, then dividing the central area into 6″ squares, especially interested in solving the rib cage with the intricate layers that need to be separated from each other. Having done this twice now I think I see how there might be a method for rendering the ribs more easily if you paint the spine first, then only do the front ribs, thenÂ let it dry before working onÂ the back ribs. It really is tricky to separate the layers out in your mind. Maybe I’ll try it on the other half of the chest.

The first wing is only outlined at present because I want to figure out what the best way to get that soft feeling of feathers into the paint. I like the angel of death having some gentle qualities to it.

Dru Pagliassotti reminded me that theÂ psychedelicÂ old space rock band Hawkwind did a song with the lyric “We’re angels of life, we’re angels of death…” (and that’s pretty much the only lyric in the entire song as far as I can remember). I’ll have to play them while I’m working to get into the metal spirit of the thing.Â

I’m really enjoying this. I know my friend Steve Mahr will too!

1 Response to Angel of Death