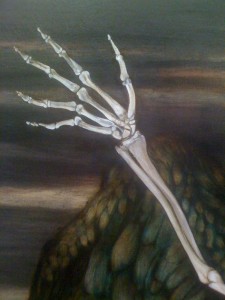 Both hands have been repainted in white, and now I’ve detailed the left of the two in Van Dyke Brown, making it feel more united with the arm and body than it did before. It’s not terribly difficult work, being monochrome and mostly already rendered in the white, but it’s labour intensive because there’s a lot happening in a small area.

Once in a while people ask me what music I like to paint to. Today I’ve been playing nothing but Nick Cave, who I admire greatly. He has a morbid sensibility on occasion, but has such a gift for combining a beautiful melody with challenging lyrics that I think his work’s irresistible. I’d like to paint in the way that he makes music: within the structure of technique, but with a fierce creative independence.

Michael Pearce is an artist, writer, and professor of art. He is the author of "Art in the Age of Emergence."
View all posts by pearce →
This entry was posted in Angel, Making work, Other people's work, Tarot-related paintings. Bookmark the permalink.