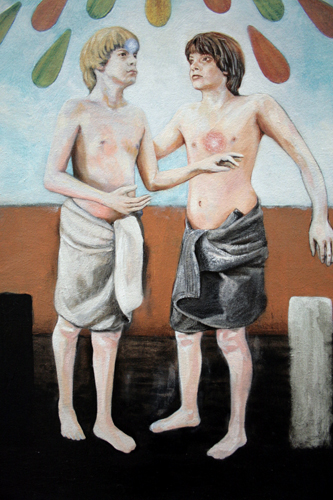 I worked on the legs of the twins in the Sun painting, building a decent first layer of skin tones over the rough sketch version – still pretty rough, but making sense of the structures of the feet and knees. The towels around their waists got two more layers, first a correction of the inaccurate drawing that had been there, then a mixed layer of dry-brushing and working on the highlights with some white.

I keep walking from the studio to my office but completely forgetting to get the reference shots of that wall in Avebury that I want to use for the wall behind the boys. I think it’s appropriate that a wall from within one of the greatest megalithic structures in the world should become part of an allegorical scene within an alchemical retort, because just as the retort is the container for the reduction and coagulation (solve et coagula) of the elements, Avebury is truly one of the environments that shaped my imagination as a young man, becoming a vessel for personal transformation.

I worked on the skeleton, adding a little raw sienna to warm areas of the bones and giving them a touch more variety on the surface, so there is a bit of vibration between the warm sandy brown and the cool blue edges of the bones.