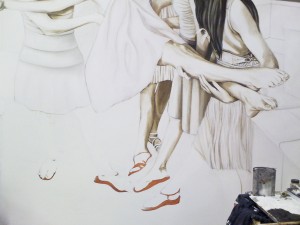 After a slow start I’ve finally got back into the groove and started getting the legs into shape. I’m rubbing in the shadows with Raw Umber and working on building the sandals beyond the very sketchy outlines I have previously rendered using a striping brush with some Foundation white on a small round. I’m enjoying the work, although it did take a while to get into it today.

Earlier I painted out the “Roman soldier” version of the dress on the left side because it seemed too square for these carefree teenagers to wear – I want lightness to dominate, and I’ve got about as much heavy work going on on the right hand side as I’d like to see just in those buckles. I really don’t want to overweigh the left side with too much material, because the legs come forward so much – if there’s a lot of information around them to the left I fear that they won’t feel as free of gravity. I’ll re-work the surface of the dress with this new, layered design in a Raw Umber when the Foundation White is dry so that it matches the rest of the base work. I think I’ll let colour be the factor that separates this dress from the white of the Empress’.