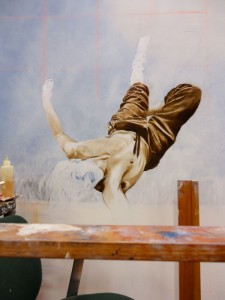 I’ve started work on the Hanged Man, painting a first layer of Raw Umber to start defining the figure. I’m particularly happy to see the foreshortening of the figure working well.

Pitture infamanti were part of a tradition that was designed to cause humiliation to its target by displaying in public the shame of the person who had offended the authorities, ideally ruining their reputation. Public humiliation was an established form of punishment in North Italian cities for people who had offended public morality, including the practices of stripping the victim naked and chaining him to a post in the town square, wearing a paper pointed hat with his crimes written upon it. Other punishments included degrading the victim by making him ride a donkey backwards, holding its tail, or being forced to kiss the bottom of a pig.

If criminals had escaped the city, punishment became tricky â€“ how was justice to be done? For debtors and traitors who had fled the answer was that paintings of them were commissioned to humiliate them in their absence, revealing their shame to the people. There are numerous records of the commission of such works, which were displayed in cities all over North Italy, but none have survived to the present because they were placed outside in the crowded plazas and market places, where both the weathering of the elements and the damage inflicted upon them by stone-throwing enemies took their toll upon the paint. In addition changes in government sometimes made them obsolete as last weekâ€™s enemy became this weekâ€™s friend, in which case they could suddenly become embarrassing and were quickly disposed of.

Michael Pearce is an artist, writer, and professor of art. He is the author of "Art in the Age of Emergence."
View all posts by pearce →
This entry was posted in Hanged Man, Making work, Paintings, Sources, Tarot-related paintings. Bookmark the permalink.