I like to use the golden section as a compositional tool, just as the great artists of the renaissance did long ago, so it will come as no surprise that I’ve been working out how the Traveling Man painting will be arranged on the canvas. When I’m in the preparation phase of painting I’ll spend quite a long time thinking first about the general idea of what the thing is that I’m making, then there will be a period of contemplating the actual image – what it will look like and roughly where things will be placed, then I’ll begin to sketch the idea out and divide little thumbnail versions of the sketch with lines on the golden section ratio so that I can place place the key events of the painting on nodes that are derived from the network that can be made from the lines. 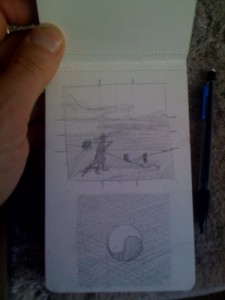 In the first photo you can see the lines on the edges of the square showing where the important lines of the composition fall across the page. Now that the drawing has been established over the composition it’s hard to see the structure clearly, so I’ve added a structure drawing in the second picture that shows how the composition fits to the golden section lines.

In the previous post I showed a slightly earlier version in which I was feeling out how the painting was going to work. Here the ideas are getting more refined and balanced.

The reason I use the ratio is that the golden section can be found all over the human body – in the height of the navel, the elbows and knees, the finger joints – and in nature it’s to be seen in spiral galaxies and shells, the patterns of branches and an amazing variety of forms both great and small. Vitruvius, the father of architecture, believed that buildings and art should reflect the composition of the body, famously describing the proportions of the idealized body in his Ten Books on Architecture. If we use the ratios of the body, including the golden section, the work we make reflects the divine order of the natural world, providing it with a graceful structure that will help to make it beautiful (if our technique is up to the challenge).