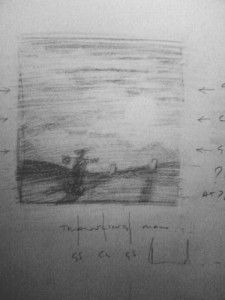 I’ve sketched a new version of the Traveling Man painting, based on a path that is receding from the picture plane over a hilltop, so that the landscape is low in the composition, and allowing a valley view that needn’t impose too much upon the dawn sky. I want to put a pair of pillar stones on either side of the road, so that the man will pass between them as he steps into an unknown future.

He’ll have a bundle on a stick, as the Fool from the tarot deck, and he’ll be stepping forward on his journey. The sky will be the dominant image of the painting, and the figure is going to be somewhat shadowy, advancing toward the sun, rising in the East.

The road that the fool is traveling on is somewhere near a pass close to the top of foothills. This is wild land where brigands might roam to prey on reckless wanderers; where stones placed four thousand years ago still watch the movements of modern journeyers.

I think itâ€™s on Dartmoor somewhere, perhaps close to the famous Hay tor, where the roads sink slightly into the grass and the wild hunt roams in search of the souls of the un-baptized. The ground is weather beaten there, covered by thick tough grass that has been chewed on by generations of tough Dartmoor ponies, destined for the dining pleasure of dogs. Roads are little better than tracks in some parts of the moor, single lanes that cut deeply into the land, overhung by mossy trees and dipping through the icy clean water of the streams running from the hills.

I’ve been admiring Botticelli’s glorious paintings in a huge volume that was published recently for a ridiculously cheap price. Because I’m thinking about the pathway that the Angel of Birth painting is going to take I’m very interested in the decorative floral work he did on the clothing of several of his women, which I’ve always thought were extraordinarily beautiful and I can fully see doing the fabric of my Angel’s dress covered in leaves and roses as an homage to this great painter. I also noted a neat compositional trick in his Primavera, where the central figure is framed by an arch concealed in the form of the trees, with silhouette branches interlacing the blue sky contained within the shape. I’m not sure where I can use an idea like that, but one day it’s going to pop up, guaranteed.

During the afternoon my wonderful son, Aihua and Jason helped me to put up the Alchemy Tree in the Kwan Fong Gallery ready for World AIDS day on the 1st December. We’ll hang a few hundred condoms on it for this event, promoting safe sex as an important way to control the spread of HIV and other STD’s. I’ve been involved in AIDS exhibits for several years now and I really hope that people will take seriously the importance of being cautious. My brother in law died horribly from AIDS – I wouldn’t wish it on anyone.

The symbolism of having a tree laden with condoms shouldn’t be lost on anyone. Remind anybody of the fruit of the tree of knowledge of good and evil?

Once the tree was fully wrapped in Christmas tree lights and fabric I made my way to the studio, where I painted another skull, leaving five more to complete. I’m quite excited to be entering the home stretch of making this painting, and getting enthusiastic about moving onto the next three pieces.