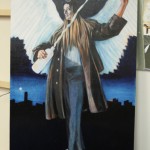 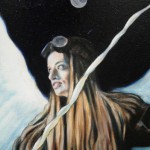 I feel a little foolish posting the second picture, because it represents so little actual painting work, but quite a lot of investigation into the background of Temperance in the renaissance symbolism that lies behind the tarot cards of the fifteenth and sixteenth centuries. I was interested in the astrological correspondences alluded to by hermetic writers, finding that Justice is often compared to Libra – the scales – so I started digging into the potential relationships to the heavens that were associated with Temperance. Obviously the water bearing characters of Greek mythology caught the attention of renaissance writers, particularly the tale of Ganymede, the beautiful young man who caught the attention of Zeus, who stole him away to heaven and immortality as the water bearer to the gods. Having already decided that there needed to be something above her head I dug up a picture ofÂ Ganymede,Â theÂ moon of Jupiter named for the immortal youth, forever orbiting about the ruler of the heavens.

In the first shot you’ll notice that I altered the shape of the moon, because I realized that it couldn’t possibly be a crescent facing the sun, so instead I went for a nice full face. I changed the little alchemical symbols on the bottles so that they more truly followed the lines of the curve of the ellipse, and I darkened the colour of the upper bottle with some of the Graham’s Burnt Sienna. I really like this pigment, because it’s a natural earth, not a synthetic. The synthetic burnt siennas are fantastic transparent iron oxides – magical paints in their own right, but notÂ a real-deal earthy semi-opaqueÂ burnt sienna. Hats off to Art Graham paints once again. I love them. (Where’s my cheque?)Â

With Justice and Temperance completed, two down, twenty to go.

Michael Pearce is an artist, writer, and professor of art. He is the author of "Art in the Age of Emergence."
View all posts by pearce →
This entry was posted in Alchemical work, Making work, Sources, Tarot-related paintings, The Cardinal Virtues. Bookmark the permalink.