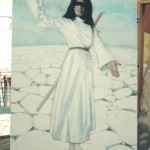 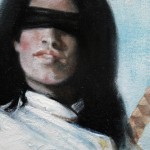 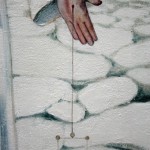 I had a little window of opportunity to fill this afternoon, so while Death dried behind me I set to work putting the finishing details onto Justice, including a delicate balance suspended from her hand.Â I decided to make a very finely weighted system of spheres instead of the more conventional scales because I am interested in expressing the idea of cosmic balance here.Â The fine line that comes from the heavens piercing her raised palm matches that which suspends the balanced spheres,Â suggesting that justice is an issue of vertical balance as well as horizontal balance, with the universal value above weighed with the human balance of dualities below. Of course the pierced hands and feet allude to the stigmata of the avatar Christ, whose mystical redemptive qualities express the heart of Â divine Justice, that although we fall short of the divine despite our desire for union with the deity, the divine can come to us and allow us access to it.

On her lapel I added a discrete pentagram, both as a reference to the stigmata and to the Pythagorean understanding of the number five, which includes the extraordinary ratio 1 : 1.62 upon each of the lines making up the symbol at their intersections. This “divine ratio” was thought of as one of the fingerprints of God on the universe by followers of Pythagoras, who were awed by the grace of the spirals created by its geometry, the relationship it has to the Fibonacci series, and its frequent appearance in nature, both on a cosmic scale (even galaxies conform to the ratio) and an earthly scale (shells, sunflowers, artichokes…). Incidentally, Â the balance Â and the horizon line are bothÂ upon the line of 1 : 1.62.