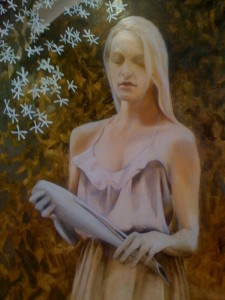 I’ve started to lay down the first layer of flesh colour to the figure’s skin, using a velatura of Viridian and Cadmium Orange with Ceramic White, then popping in and blending a touch of Iron Oxide Red in the shadows, and a little pure Ceramic White for light areas. The skin is becoming more skin-like as a result, and now her dress stands forward from the flesh, having a layer of pure Ceramic White glazing it and softening some of the dark shadows that create the folds.

I must remember to discretely use a little Viridian and Cadmium Orange somewhere in the leaves so that the foliage unifies with the figure.

â€œWhat do they mean by a Star? When a star is painted by the Egyptians, they mean a god, twilight, night and time, as well as manâ€™s soulâ€.

In another entry the late Egyptian priest says that the star was used to represent the goddess Isis, defender of young children and the dead. In fact this is completely inaccurate, although of course renaissance artists couldn’t possibly know what hieroglyphics really meant, having only Horapollo for their interpretation of these ancient symbols, leading to centuries of symbolic imagery based on bad information!

Michael Pearce is an artist, writer, and professor of art. He is the author of "Art in the Age of Emergence."
View all posts by pearce →
This entry was posted in Making work, Sources, Tarot-related paintings, The Star. Bookmark the permalink.