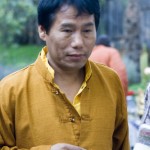 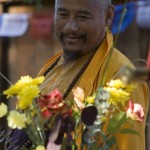 I felt extraordinarily privileged to meet Lama Pema Tenzin, and Twewang Seetar Rinpoche when they came to visit friends here. They’re from Bhutan, o Druk Yul (the Land of the Dragon), the last Buddhist kingdom in the world.

At age 13, Lama Pema Tenzin began to study traditional Tibetan and Bhutanese arts with his teacher Bhuli Tulku Rinpoche, learning the complicated challenges of thangka paintings.Â  He is also master of meditation, ritual and chant, with great expertise in the Nyin Thig, Dudjom and Pegyal Lingpa lineages.Â  He has traveled extensively throughout America, where he conducts classes and retreats.Â

Lama Tsewang Seetar Rinpoche is the head of the Sangye Teng Monastery. He was recognized as the successor of of Terton Padgyal Lingpa and the rebirth of Nubchen Sangye Yeshe, a heart disciple of Padmasambhava, by his Holiness Kyabje Dilgo Khyentse Rinpoche and began his studies at the age of four.Â  He is a master of the Longchen Nying-tik and the Chod systems of Buddhist Tantric practice.

We participated a puja fire ceremony that was designed to allow us, after meditative chanting, to place branches onto a fire as symbols of the things we wished to put behind us, or to find karmic balance for both good and evil in our pasts. We circled the fire, branches crackled as they burned and the smoke rose into the clear sky, carrying with it the darkness of our past actions. The ritual was simple, but effective, using some basic symbolism to manifest our need for forgiveness and connection to a universal spirit.

The Lamas were here to visit a three-year-old boy who was recognized by Rinpoche as the reincarnation of his teacher’s teacher. When he was a little over one and a half the llamas showed him objects that had belonged to the teacher, including a picture frame and mala (prayer beads) that he recognized and placed over the head of Lama Pema, which was an action that the teacher had made his custom.

Michael Pearce is an artist, writer, and professor of art. He is the author of "Art in the Age of Emergence."
View all posts by pearce →
This entry was posted in Life. Bookmark the permalink.