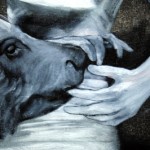 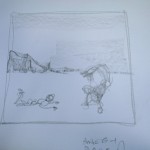 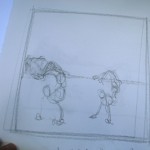 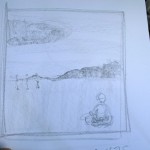 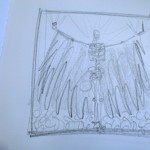 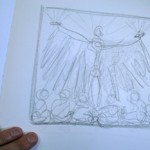 After my morning class I got started preparing the angels and devils sketches, moving toward decisions on what these big pieces are going to be.Â

I’m particularly enjoying the scorpion-like people in the desert, and the hermit with the three figures in the distance. The two angels are more obvious, lacking subtlety, so they might not make the cut. I plan to continue drawing to see where the ideas go to, following the pathway the images take rather than trying to dictate their growth too severely. I like the way that one of the figures has fallen to the ground in the second scorpion sketch, for example, it brings a narrative to the image. Will the other scorpion person attack him now he’s down? Why is he on the floor?

I also spent a bit of time altering the hands in the Fortitude painting, giving them a bit of drama as they move to hold the mouth of the bear, controlling it without effort – not unlike the magician card. I think placing them in action is more interesting than having them already engaged.

Michael Pearce is an artist, writer, and professor of art. He is the author of "Art in the Age of Emergence."
View all posts by pearce →
This entry was posted in Angel, Devil, Fortitude, Making work, Tarot-related paintings, The Cardinal Virtues. Bookmark the permalink.