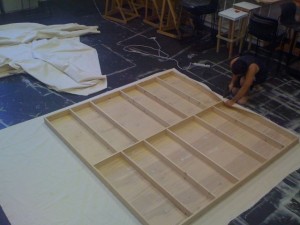 We had a very busy day in the studio. Ethan and Joseph were occupied with the second coat of gesso on the big Virtues canvas, then Joe got into stretching the third of the eight foot square canvas that Cyn McCurry sent from Texas onto its panel, ready for a wash of distilled water prior to preparing the surface with a coat or two of gesso so I can draw the empress and her attendants onto the new surface. 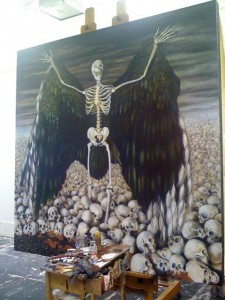 While the lads worked hard at preparing the surfaces for painting I added more peacock feathers to the Angel of Death, getting them most of the way up the right wing. I’ll add colour to them tomorrow and figure out what needs to be done to the top of the wings, then get to work on the empress drawing if the gesso dries fast enough to take the graphite.

I scanned images from Michael Maier’s Atalanta Fugiens, a well known alchemical emblem book. Emblem books were incredibly popular bestsellers in the fifteenth through seventeenth centuries, filled with allegorical pictures and their accompanying epigrams, generally speaking rooted in mystical Christianity and Neo-Platonism. I love these books! They’re inspiring, mysterious and fulfilling, and profoundly supportive of the desire of man to understand the mind of God, while written and illustrated in a style that is unapologetically intelligent, requiring the reader to be thoughtful and patient as the sometimes obscure messages of the emblems is revealed by research and exploration. I emulate them in my paintings, hoping to equal their spiritual depth and to follow their guidance toward a better understanding of the universe.

Michael Pearce is an artist, writer, and professor of art. He is the author of "Art in the Age of Emergence."
View all posts by pearce →
This entry was posted in Alchemical work, Angel, Making work, Tarot-related paintings, The Cardinal Virtues and tagged rosicrucian. Bookmark the permalink.