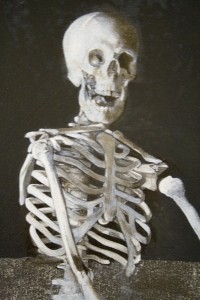 I continued work on the bones, getting most of the rib cage and the left shoulder and upper arm done as well, listening all the while to 1970’s Ozzy era Sabbath recordings and Metallica’s new recording – it seemed appropriate somehow considering the guitar hero pose the skeleton’s standing in. Back to Mozart’s Requiem Mass later.

It’s really tricky work, requiring concentration to make sure that the ribs stay in order and that they all correspond to their counterparts in the back. There are some interesting pieces of this particular painting puzzle – I noticed that the skeleton I’m painting was cast from someone who had clearly broken a rib in life which healed set back slightly off its proper angle, giving him a bend in the left side of the rib cage that normally wouldn’t be there. I corrected it in the painting, if only because I have a very strong memory of going to an art gallery with my parents – both medical professionals, one a radiologist, the other a dentist – and listening to them discuss the problems of a skeletonÂ in one of the paintings we saw. They picked out all the health issuesÂ that would have been caused by the artist’s failure to get things right in the rendering, critically demolishing the painting; consequently I’m determined that the bones in this painting should be right so that should Doctors look at my work they will appreciate the accuracy of it, not the mistakes.Â

The sky has been fantastic all day – rolling great white cumulus clouds around over a rich blue background, like a cauldron in the heavens. I’m increasingly interested in clouds as elements of the paintings, and I’ll probably include some rich sky-scapes in the angel pieces.

Michael Pearce is an artist, writer, and professor of art. He is the author of "Art in the Age of Emergence."
View all posts by pearce →
This entry was posted in Life, Making work, Tarot-related paintings. Bookmark the permalink.