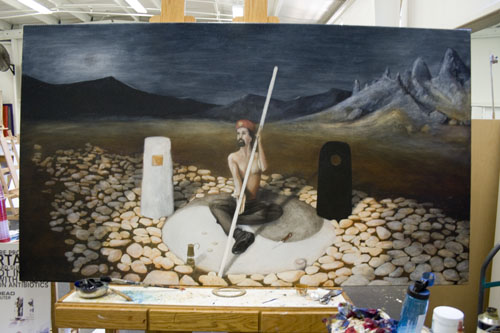 Here’s a radical change in the appearance of the painting. The sky approaches its completed state, needing a yellow / white moon and a glaze of Ultramarine blue, with some stars and hazeÂ to complete it. However, it will need a little care to smooth it out and soften some areas which are a little brushy. I’ll also put in some light, milky clouds lit by the silvery moonlight. Of course, the moon will sit in that light patch in the left where that orange circle was until quite recently.

The hermit is now seen in a pool of light, isolated from the desert surroundings, which seem larger.

I painted the first layer of the lantern over its initial drawing, getting the flat brass colour with a raw sienna and a touch of black, then some white to bring up the value a little.

I asked a couple of visitors about the yin yang, which didn’t seem to bother them, in fact one of them said they hadn’t noticed it was there – so that’s perfect, it’s a hidden secret of the painting now. Speaking of hidden secrets, I thought I’d emphasize the little peaks on the horizon that sit at 1.62 with a touch of moonlight backlight.

Michael Pearce is an artist, writer, and professor of art. He is the author of "Art in the Age of Emergence."
View all posts by pearce →
This entry was posted in Alchemical work, Bombers, Making work and tagged 1.62, duality, oils, painting. Bookmark the permalink.