Back in the studio

We had a bit of a dramatic class this afternoon, when one of my studentsÂ literallyÂ passed out in my arms. I think she stopped breathing for a few seconds but while trying to revive her and listen for her breath and simultaneously thanking God that I learned CPR when Ethan and I went to camp, she came back to consciousness again, in a cold sweat. Medics were there very fast, and she seemed to recover fully afterwards, so it all ended well. Certainly not the usual dynamic of the painting studio.

The scary part of the experience for me was that she went down so fast and unexpectedly, so there was no time to think through the proper steps, only to react. 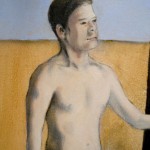 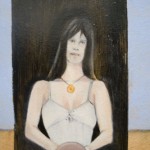 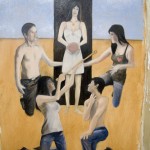 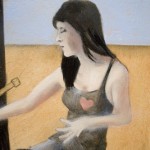 In the morning I had begun working on the Golden Bowl andÂ I continued after the drama had subsided and my student was safely taken care of, laying down some flesh tones blended gently over the rougher early layer. I added some warm areas to the skin in areas that are away from the light, which comes from the centre of the painting. The sky obviously got its first layer of blue, which will be followed by a glaze layer shortly. I knifed this layer on mixing some cobalt blue and zinc white together so that the orange of the burnt sienna will show through and make some of the next layer, probably an ultra blue, read a little darker than where it sits over the pale mixture.

Having blended the flesh tones with a soft dry sable round brush I carefully didÂ some touch up work to restore some of the dark tones with a dark brown and a little black.Â

I want to get some four foot high boards for the virtues, so I’ll have to get to Home Depot tomorrow on the way to the studio. I’ll have to get them to cut it down for me, stretch some canvas and gesso. I’m really looking forward to getting back to some work at a larger scale.Â

Good to get back to work! Crazy way to do it!Â

Michael Pearce is an artist, writer, and professor of art. He is the author of "Art in the Age of Emergence."
View all posts by pearce →
This entry was posted in Golden bowl, Making work and tagged Alchemical work, oils, painting. Bookmark the permalink.

1 Response to Back in the studio