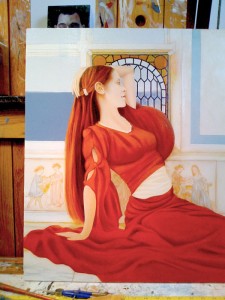 I’ve added the bones of new sections of window to the left of the painting in a rethink of the architecture of the painting, mostly because I dislike the small size of the window as it was, but also simply because I like the way the stained glass works alongside the red hair and dress and want more of it. Figuring out the architecture was enjoyable, with some interesting shapes to explore, then it was satisfying painting out the existing work with a base layer of ocean blue, most of which will be obscured by the glass when it gets painted over.

In the morning Tony Pro, Mike Adams and I were interviewed for a short video about the New Romantic Figure Painting exhibit. I’ll post more about it when it’s complete. It’s going to be put onto YouTube on the 22nd August, right after the show opens, including interviews with the artists, film from the opening, and shots of the paintings.

Michael Pearce is an artist, writer, and professor of art. He is the author of "Art in the Age of Emergence."
View all posts by pearce →
This entry was posted in Arthurian, Exhibits, Making work, Queen of Cups, Tarot-related paintings. Bookmark the permalink.