Amelia in the desert

I added a sky, because I just couldn’t stand leaving the background in darkness, wanting to find the desert scene I enjoyed in Bombers. So right now I’ve added some of the salty stones in the foreground and I’ve painted a blue sky ready for the next layer of dark Ultramarine or Prussian Blue that will give me the night, allowing that light to glow richly. I really love the ability of Prussian Blue to go from super dark to a nice rich glaze. Eventually the circle of orange will become a bright ball of light on the left side of the canvas.Â

I wasn’t satisfied that there was enough rich painting in the jacket, so even though there was some very nice texture going on here and there I added some more knifed on paint to improve that lovely thick knifed on layer. I also dropped the blue of her pants back a bit by putting on a glaze of the brown from the jacket, then wiping it off, subtly softening the colour so it doesn’t attract the eye too much. The face and the hand reaching for the light are the areas I want to attract attention too, and the bright ball of light on the left side.

I probably will have to wait for a couple of days before hitting this painting again, because it’s still pretty cool here. 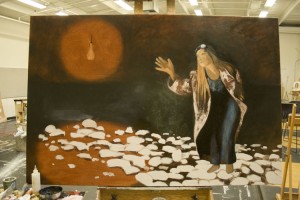 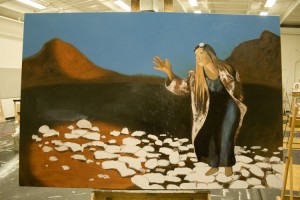