Amelia in the dark, Temperance gets wings 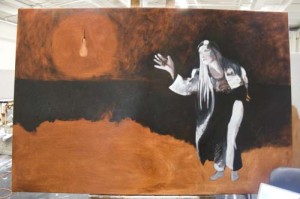 I built up some of the shadows for Amelia’s background. I like the way this looks so far, and we’ll see where it goes from here. The light is beginning to feel real and she’s coming off the canvas quite nicely. This is almost a return to the way I was painting several years ago – very Caravaggio influenced and interested in figures emerging from darkness. I think now the paint will be richer and more vibrant with the knife work combined with the brush.

That line, incidentally, is at 1 : 1.62 of the vertical height of the canvas.

I’ve been considering the development of style in my work. I’m painting pretty much the same theme of ideas that I wanted to make when I was a much younger man, but the difference is that now I have the technical ability to do it. We have a responsibility to pass on technique to the next generations of artists so that they are able to make whatever they want to – the modernist century was not good for that mindset, being more interested in the idea that personal exploration was more important, and I think it is, but not at the price of learning the tools we need to be able to put the ideas we gain from digging into ourselves onto canvas, or installations, or whatever creative medium we choose. I want my students to be able to balance their work between technique and experiment. 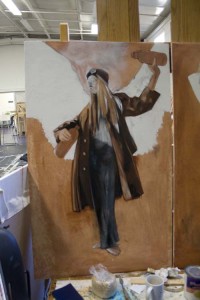 Temperance is moving along too. She has a nice pair of swan’s wings to boast of that I’m happy with. Of course they’ll need lots more detail to show where the feathers are, and I’ll be defining their shape and colour as time goes by, but this is a good start. I used reference shots of swans and pelicans taken when I was at a bird sanctuary near Bath, England, shot in 2006 during a family trip to visit my parents and brother’s family! Go figure. Never throw your pictures away!

I reworked Temperance’s face while I was at it and got a good layer of grey value work on there, improving the rough layer I had already done. She looks a bit stern right now, but you can’t do everything in one go, and sometimes it’s far better to wait for the paint to dry if you have work done that you like, fixing what you don’t like later, when you won’t destroy the good things.

Michael Pearce is an artist, writer, and professor of art. He is the author of "Art in the Age of Emergence."
View all posts by pearce →
This entry was posted in Alchemical work, Amelia Earhart, Britain, Installation work, Making work, The Cardinal Virtues and tagged Alchemical work, Tarot-related paintings, virtues. Bookmark the permalink.

1 Response to Amelia in the dark, Temperance gets wings