A Little Help from a Friend 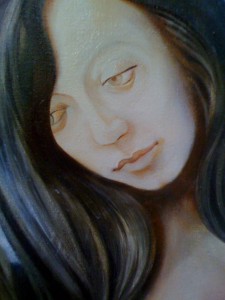 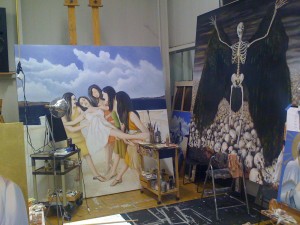 I’ve been reworking that face again, because I really disliked the right eye. Now I’ve done it again, taking a lead from the great Botticelli’s Madonna and Child and rendering a more introverted face that regards the Empress with a slight sadness that could also be interpreted as devotion. I’m happier with this version than I have been with any of the earlier three. While I am shocked that there have been four versions – it’s most unusual for me to re-render a face so often – I suppose it shows how much I value the balance of this face with the others. I love Botticelli’s paintings of women – he’s the best.

Bert Green came over to drop off some ravens from the As the Crow Flies installation which I’d left behind at his gallery, so I pulled out the Traveler and the Angel of Death to show him. It was useful to see how the three paintings work together, even though the Empress is so far from completion, and really demonstrated how much detail the new painting will need to stand alongside the others.

Michael Pearce is an artist, writer, and professor of art. He is the author of "Art in the Age of Emergence."
View all posts by pearce →
This entry was posted in Angel, Empress, Making work, Pre-raphaelite, Tarot-related paintings. Bookmark the permalink.