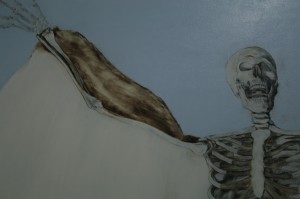 At last I’m back in the studio working on the angel of death.Â I used a long lining brush to paint the details of the arm bones, then my fingers to smudge in shadows around the bones and into the surface of the wings.Â I’m building the surface of the wing way darker than it will end up, in a Van Dyke brown that will take a glaze of Zinc white and pop forward while leaving the textures that I’ve laid in with a towel rag.Â

I’ve been sketching for the afterlife piece, which I think I have nailed down now, having morphed from a suspended figure in the void to a fairly small circle with a male and female pair laying entwined with each other in a yin yang arrangement. I think I know who to get to model for it, so I hope to get moving with this piece pretty soon.