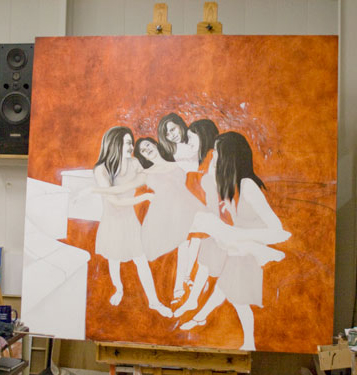 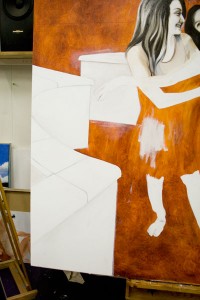 I’ve spent my studio time painting skin, walls and dresses white. Having woken up early and excited about painting the architecture in the painting I managed to get to the studio by eight o’clock, getting directly into the work (after a nice cup of tea).Â First, solidifyingÂ the low marble walls of the circular structure the girls have found themselves in, which is beginning to make sense now that we can see some of it more clearly. I really enjoyed the mass created by the substantial nature of the white over the orange sealer. The line work is simply Maimeri Van Dyke Brown blended into the white to create the cracks between the slabs. Once I have all the walls painted I’ll get into glazing and staining them, making them feel more realistic than these rather sterile slabs.

I’d like to have been able to show more completed walls, but a minor disaster struck this morning – I ran out of Michael Harding’s fabulously dense Foundation White, which meant that I’ve had to stop work on the base coat of the marble until more can be flown in from the far reaches of the continent in a few days – somewhere on the East coast.

Reflecting upon the desperation which I felt when I realized that I had no more of this fabulous white, I’m a little disturbed by my relationship to certain pigments and brands of paint, which sometimes dangerously resembles being a crack addict.

I continued painting by moving over to the dresses and the skin of the two girls on the left, using more of Michael Harding’s paint, this time a Cremnitz White, a far more transparent pigment that allows more of the warmth of the Iron Oxide sealer coat to glow through it.