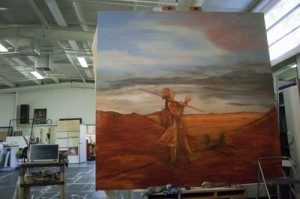 I have totally lost my voice! Itâ€™s alarming to try to speak to visitors only to hear a croaking noise come out, although thereâ€™s something strangely pleasant about not being able to talk that I canâ€™t quite put my finger on. All my conversation is at the level of a whisper, making the most mundane subjects become secretive and mysterious, and Iâ€™ve noticed that my friends sympathetically lower their voices.

Regardless of speaking or not, itâ€™s been a good day in the studio so far: Iâ€™ve been working at the Fool’s sky and making some progress with getting something that is dramatic but not over-worked. I want to avoid excess and end up with a subtle but beautiful dawn. Iâ€™m finding that layering thick and thin coats is working well, using an orange iron oxide for the yellow tints close to the horizon, and a cobalt blue mixed into lead white for a nice thick coat of blue higher up.I used a rag to lift sky blue paint from some of the areas of Iron Oxide that I used to seal the canvas leaving a nice warm glow to areas of the clouds, then a soft badger-hair brush to pounce the remaining paint into the surface, giving it a very soft blended feeling. I dry-brushed some of the sky blue into the clouds, allowing some of the oxide to mix with it and create a brownish layer over the dark clouds. 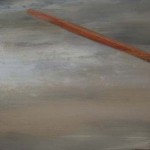 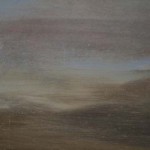 This can dry for a while now, then Iâ€™ll look at painting a glaze of Prussian blue up high, building the clouds up and darkening the sky above and making the horizon deepen and bring some depth to the painting.I’ve included a couple of details of the sky as it is now. With a few more layers of glaze and rich whites I think it will turn out rather well.

These big paintings use a lot of paint, you know. I’mÂ quicklyÂ running out of materials. Time for a visit to Steve at Continental.

Finally, I crossed the studio to visit Amelia, and glazed the orb with the left over Orange Iron Oxide, ragging most of it off again, but leaving enough for this golden glow. The colour of the orb is far better balanced with those on Amelia. With a light on the piece sheâ€™s really reaching for the orb.

All these pieces work best with spotlights focused on them, while the rest of the room is left in relative obscurity. The spots highlight the focal points of the paintings too, adding to the illusion of light within them. The next show has to be lit very carefully.

Hereâ€™s a nice idea for the four paintings: in the corner of each, paint a little scene of the painting before and after it in sequence. For example, The Angel of Death is preceded by The Traveling Man and followed by In Between, so in the left corner I would paint a reference to the Traveler, and on the right an emblem of In Between, cementing the relationships between the painting and reinforcing the cyclical order.

Michael Pearce is an artist, writer, and professor of art. He is the author of "Art in the Age of Emergence."
View all posts by pearce →
This entry was posted in Alchemical work, Amelia Earhart, Life, Making work, Tarot-related paintings. Bookmark the permalink.