Vitruvius on the human body 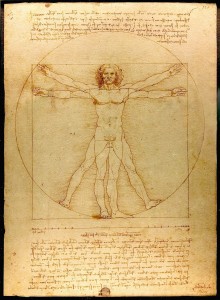 VITRUVIUS
THE TEN BOOKS ON ARCHITECTURE

This text is no longer copyright protected.

ON SYMMETRY: IN TEMPLES AND IN THE HUMAN BODY

1. The design of a temple depends on symmetry, the principles of which
must be most carefully observed by the architect. They are due to
proportion, in Greek [Greek: analogia]. Proportion is a correspondence
among the measures of the members of an entire work, and of the whole to
a certain part selected as standard. From this result the principles of
symmetry. Without symmetry and proportion there can be no principles in
the design of any temple; that is, if there is no precise relation
between its members, as in the case of those of a well shaped man.

2. For the human body is so designed by nature that the face, from the
chin to the top of the forehead and the lowest roots of the hair, is a
tenth part of the whole height; the open hand from the wrist to the tip
of the middle finger is just the same; the head from the chin to the
crown is an eighth, and with the neck and shoulder from the top of the
breast to the lowest roots of the hair is a sixth; from the middle of
the breast to the summit of the crown is a fourth. If we take the height
of the face itself, the distance from the bottom of the chin to the
under side of the nostrils is one third of it; the nose from the under
side of the nostrils to a line between the eyebrows is the same; from
there to the lowest roots of the hair is also a third, comprising the
forehead. The length of the foot is one sixth of the height of the body;
of the forearm, one fourth; and the breadth of the breast is also one
fourth. The other members, too, have their own symmetrical proportions,
and it was by employing them that the famous painters and sculptors of
antiquity attained to great and endless renown.

3. Similarly, in the members of a temple there ought to be the greatest
harmony in the symmetrical relations of the different parts to the
general magnitude of the whole. Then again, in the human body the
central point is naturally the navel. For if a man be placed flat on his
back, with his hands and feet extended, and a pair of compasses centred
at his navel, the fingers and toes of his two hands and feet will touch
the circumference of a circle described therefrom. And just as the human
body yields a circular outline, so too a square figure may be found from
it. For if we measure the distance from the soles of the feet to the top
of the head, and then apply that measure to the outstretched arms, the
breadth will be found to be the same as the height, as in the case of
plane surfaces which are perfectly square.

4. Therefore, since nature has designed the human body so that its
members are duly proportioned to the frame as a whole, it appears that
the ancients had good reason for their rule, that in perfect buildings
the different members must be in exact symmetrical relations to the
whole general scheme. Hence, while transmitting to us the proper
arrangements for buildings of all kinds, they were particularly careful
to do so in the case of temples of the gods, buildings in which merits
and faults usually last forever.

1 Response to Vitruvius on the human body