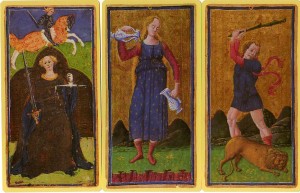 The three images here come from a deck of cards produced for the Visconti Sforza family in the mid-fifteenth century. From left to right: Justice, Temperance and Strength. The Marseillle deck shows the same three, which makes me wonder why Prudence was not in the deck as well. If these are the cardinal virtues inspired by Plato, they are well documented as a group of four – so where’s dear Prudence?

Michael Pearce is an artist, writer, and professor of art. He is the author of "Art in the Age of Emergence."
View all posts by pearce →
This entry was posted in Making work, The Cardinal Virtues and tagged Tarot-related paintings. Bookmark the permalink.