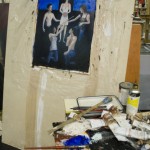 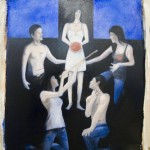 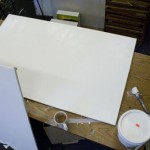 I laid in a layer of Ultramarine Blue over the entire painting, using a large, soft sable brush to blend the background area to a smooth finish, then using a many-times-laundered cotton rag to remove most of the paint from the figures. Rags have to washed a lot to take the lint out, or they’ll leave annoying bits of cloth in the paint.

I like to leave a bit of the blue on the edges of the figures, so the people emerge from the background. It’s good to use this again. I have always liked it, but not really had the opportunity to do much work of this kind for a little while. Perhaps the virtues will allow for a little stylization in the backgrounds too.

I took one of the panels home with me so that I can draw on it and really figure out the composition of the first of them. The other two didn’t have enough gesso on them, so I continued to prepare them while I was in the studio.