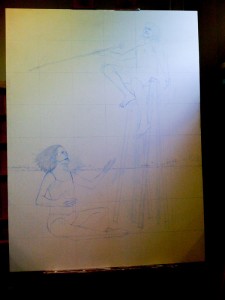 The sketched composition on the gessoed canvas which has been stretched over a wood panel.

The first stage of painting. 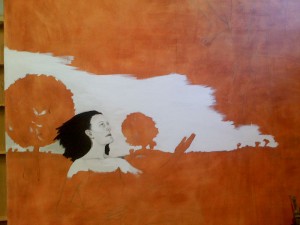 Detail of the day's work

Following shooting photos of Amy for the figure sitting on the ground I sketched the drawing onto the canvas using a simple one foot grid as a guide. I like this composition very much for a couple of curious reasons: first, the way the woman is seated refers to a figure on the Gundestrup cauldron, an ancient Celtic artefact found in Germany in the late nineteenth century. It’s special because it includes a rare example of an image of an Iron Age shaman. Wearing antlers and holding a snake while accompanied by a deer, this enigmatic figure represents the power of nature and the energy of life. Secondly, I’m particularly pleased with the arrangement of figures, with the Emperor, totally materialistic and oblivious to his lack of connection to the natural world, sits high up in a wobbly chair, while with grounded and natural energy the woman looks up at him while vines creep up to overwhelm and ultimately topple him.

Once the Â drawing was roughed out the canvas got a coat of Iron Oxide sealer to make the surface take the paint more effectively. WIthout it the gesso sucks up the oil from the pigments and makes painting a horrid experience. I like the warmth of the Iron Oxide when it peeks through layers of paint and as it warms up some of the more transparent areas in the painting. Once dry I was able to begin working in grey (en grisaille) on the painting. I’ve allowed the landscape to begin emerging in the negative spaces around the woman, from memories of a trip through the foothills of the California Sierras, where rolling hills are capped with widely spaced oak trees.

Michael Pearce is an artist, writer, and professor of art. He is the author of "Art in the Age of Emergence."
View all posts by pearce →
This entry was posted in Emperor, Folklore, Green men, Making work, Sources, Tarot-related paintings. Bookmark the permalink.