I’m learning about the popular emblem books of the renaissance, which I had never heard of until very recently. When printing became popular in the fifteenth century some of the earliest best-selling editions were books of moral lessons accompanied by woodcut illustrations, some of which superficially resembled tarot cards and alchemical illustrations. I’ve been searching through several of them to seek out images that are similar to tarot cards, finding very few pictures to compare so far other than the more common figures of the virtues (“let temperance chasten, fortitude support, and prudence direct you. Let Justice be the guide of all your actions..”) and authoritarian images of emperors and popes.Â 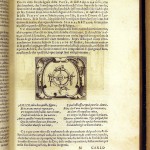 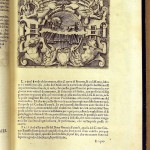 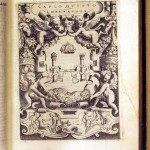 These actually come from an Italian book of biographies of the rich and famous. Nothing much changes over a few centuries.

I set these aside because they illustrate the pretty standard form of some of the images that are found in the deck, and the preliminary meanings that might be assigned to them. For example, the wheel of life, carrying people from top to bottom in a pretty clear allegory of fate; the two pillars of authority, Boaz and Jachin, that guarded the entrance to Solomon’s temple; and Phoebus’ chariot of the sun. However, the commonplace nature of some of the symbols makes the peculiarity of the more unusual arcana stand out.

Michael Pearce is an artist, writer, and professor of art. He is the author of "Art in the Age of Emergence."
View all posts by pearce →
This entry was posted in Sources, Tarot-related paintings. Bookmark the permalink.