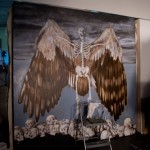 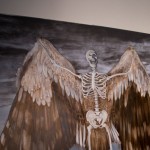 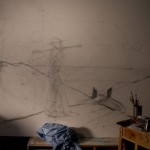 While waiting for my student to arrive to be photographed I painted a greyscale sky behind death. I let it get pretty dark so that there is an ominous sense to it, with cracks of light appearing in the sky behind the figure. He doesn’t have any hands at the moment because it would be far too fiddly to constantly repair all those little bones, so instead I’ll paint the sky then add the hands afterwards. If you’ve been wondering why the legs aren’t done yet, it’s the same reason – why bother to Â do the work when it’s going to take a beating from all the work on the landscape.

To my horror, I think I’m going to paint still more skulls to fill the entire bottom left corner, so the Angel is standing upon a large heap of them, not simply a line. Much more dramatic. Much more work on skulls.

To alleviate from dying of skull damage I’ve moved the Traveling Man onto the easel while I use my platform to work on Death’s sky. I changed the drawing a little since the last post, defining the landscape a bit more carefully and getting a much clearer sense of how the figure needs to be posed. Cody says he’ll be here at five thirty this evening for pictures, which I’m really looking forward to shooting.

Michael Pearce is an artist, writer, and professor of art. He is the author of "Art in the Age of Emergence."
View all posts by pearce →
This entry was posted in Angel, Making work, Tarot-related paintings, The Traveler. Bookmark the permalink.