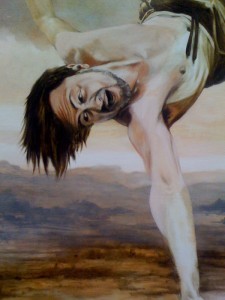 The first layer of the skin has covered the Hanged Man’s head and chest. I mixed a simple flesh base using Vermilion, Cadmium Orange and Foundation White, then made a dark and light version of it by adding more or less white. Next to it I made some Burnt Sienna and some Raw Umber for the medium darks and the shadows respectively. It’s a good start, and I enjoyed the work, but there’s a lot of editing and correcting to do to make it right. I’ve added a bit of hair under the lowest eye and like the Emperor I’ve given the face a bit more of a beard than Aaron has in reality. I think he needs a necklace, perhaps military ID tags, or something like that that adds to the sensation of suspension.

I’m writing about the Hanged Man while I’m painting him, digging into manuscripts and scholarly texts for more background information on the archetype.Â  It would be pleasant to think that in the 21st Century we should have left the cruel history of this medieval punishment behind, but as a specific punishment for treachery its use is now global; in the Iraq war it was practiced by Sunni fighters who tortured traitors then displayed their bodies suspended by one leg in the streets. More recently in the Mexican drug cartel fighting of 2010 the decapitated bodies of four young men were hung upside down from a Cuernavaca bridge with a sign reading â€œThis is what will happen to all those who support the traitor Edgar Valdez Villareal.â€

Michael Pearce is an artist, writer, and professor of art. He is the author of "Art in the Age of Emergence."
View all posts by pearce →
This entry was posted in Hanged Man, Making work, Paintings, Tarot-related paintings. Bookmark the permalink.