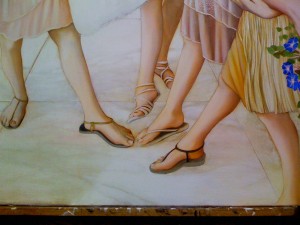 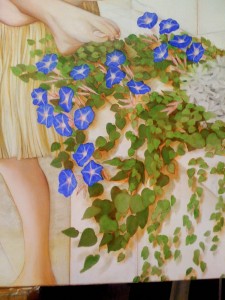 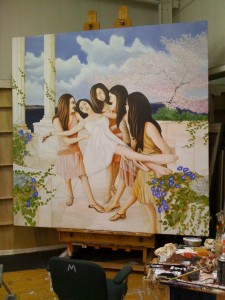 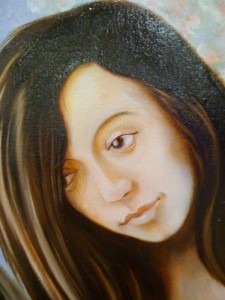 I’m not sure where to begin with writing about the changes I’ve made to the painting today, there have been a multitude of small alterations, while a few areas got a lot of attention.

First, the Iron Oxide glaze work around the leaves is complete on both sides of the painting, making the vines much more lively. I’ve used the same glaze on the faces of the pink girl on the left, the Empress, and her attendants to her right, particularly the central girl, whose eye has been opened up a little more than it was, dispelling some of her sleepiness. It needs a little touch-up to lighten it because there’s too much contrast there, pulling focus from the Empress’ face. All the faces look more lively because of the warmth around the edges and near their hair.

The marble has been treated to quite a lot of work close to the bottom of the canvas – I was able to really test the limits of my easel, pulling the painting up to highest I can get it to in this studio, enabling me to work comfortably at the bottom of the painting. (Thanks to Jay for repairing it so effectively!) There’s now a glaze coat of Ceramic White softening a thin layer of reflected colour around the feet of the girls; it’s a little difficult to see in the photo, much more apparent in reality; there’s a little pink in the stone at left and centre, while a touch of Indian Yellow tints the area around the right hand side.

I can see a few more detail areas that I would like to work on, but generally speaking I think that that’s it for the Empress for now. I’ll get a proper photo taken next week and post it here.

Michael Pearce is an artist, writer, and professor of art. He is the author of "Art in the Age of Emergence."
View all posts by pearce →
This entry was posted in Empress, Magician, Making work. Bookmark the permalink.