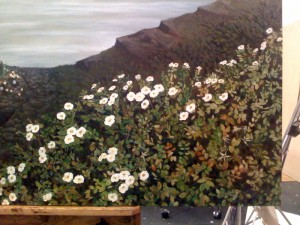 These have turned out pretty well so far. I’ve worked most of the day getting the dark shadows around the flower heads done, adding a yellow and brown centre to each one, and laying down some greens and browns over the leaves. I’ve included some deadheads in this bush to add some rhythm to the piece, so that there’s somewhere for your eye to go as you look at the work.

I added some more shadow to the objects at the traveler’s waist so that they would feel more behind the jacket flap, but I noticed that I’d made an error to the Celtic interlace on the flask, so I had to alter that, which made it bright again, so now I’ll glaze a little oxide over it again to drop it back into the shade. I’ll also need to use a dark blue to deepen those shadows around the bottle and jacket.

I lightened the shoe with a little grey so that it wasn’t so flat, because it was pulling undeserved focus to itself. The jeans at his ankles now are frayed and dangling a few loose threads, and the soles of his shoes are a little darker, again to lessen the importance of the foot so that we are more drawn to his face and hand.

Finally, alongside the Traveler as he is now, here’s a reminder of what’s coming next – time to add some more skulls to the angel… 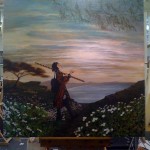