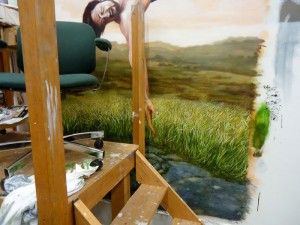 The grassy land receding to the mountains, obscured by my platform which is in place so I can reach the raised arm and leg. 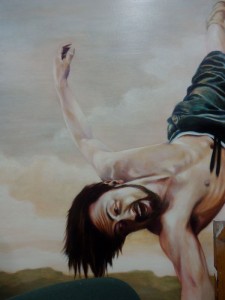 The man's arm has been treated to areas of Ceramic White, with a little Alizarin Crimson in the shadows.

If you had asked me ten years ago what colours I would use most in 2012 there is no way I would have predicted that Cadmium Orange, Viridian, Lead White, Carbazole Violet and Raw Umber would have begun to make regular appearances on my cart. I used to use an almost entirely earth tone driven palette, which has gradually given way to richer colour and much more glazing.

Yesterday I glazed the white grass with Sap Green (another favorite these days), mixing it with areas of Yellow Ochre to make some variations in the colour, while also varying the thickness of the glaze to vary the value of the colour – a shallower glaze means that more white shows through it, so it reads lighter. In the foreground areas I added a bit of Raw Umber to the green to darken it in those areas close to the rock so that the grass would get a bit of depth between the stems. It’s coming along nicely now, feeling rich and deep. I think the more glazes I put on, the richer and more complex the painting becomes.

Once the grass was done I moved to working on the raised arm, which had only had a couple of layers of paint, consequently it was pretty rough. Now the modeling is improved by highlights in Ceramic white and Alizarin Crimson. The transparent white is a lovely soft paint, nicely transparent when you’re looking for a glaze, but pretty bright too, although obviously it can’t compete with Titanium for profound brightness. The Crimson is working beautifully in the shadows. I’m emulating Rossetti, the Pre-Raphaelite painter in this work, recalling that lovely painting in the Birmingham Museum that we visited in May last year. 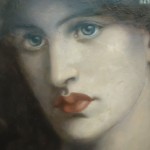 The Rosetti painting looks a bit odd because it’s under glass.

Michael Pearce is an artist, writer, and professor of art. He is the author of "Art in the Age of Emergence."
View all posts by pearce →
This entry was posted in Hanged Man, Making work, Other people's work, Paintings, Pre-raphaelite, Sources, Tarot-related paintings. Bookmark the permalink.