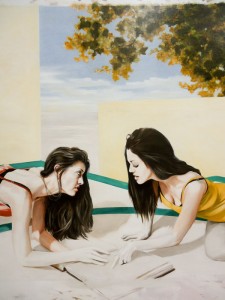 The girls are beginning to feel as if they are in a place instead of floating in a white void. 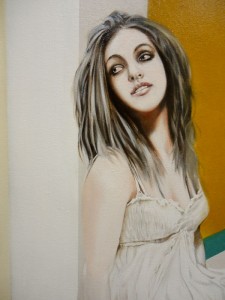 Not so ghostly, but still Stevie-Nicks-ethereal.

The painting has come a long way since my last post, with the Cerulean blue sky glazed over with a Foundation White, then a sycamore tree referenced from Bouguereau’s painting “A Young Woman Fending Off Eros” painted over it en grisaille using a Raw Umber and white to create a three toned base version. The lighter leaves are on the outside, while the darker two tones work their way towards the centre of the tree. After it was dry I loosely glazed the leaves with a mixture of Sap Green, Raw Umber and Iron Oxide Yellow, then used a rag to soften the glaze and clean all around the edges back to the blue sky. I also used the rag to pull off some of the glaze and create little pockets of light in between leaves. When that all dried I used Ceramic White to crete a cloudscape, dropping in little of the Iron Oxide Yellow for some colour. I’ll go over the entire sky – including the tree – with a unifying glaze of the same Ceramic White, then re-establish the leaves once again.

The girls have colour on their dresses now – a warm Red Ochre on the girl on the left, a Yellow Ochre on the right. I blended the colour into wet Foundation White. The flesh on the left hand twin has been given a second layer of colour which deepened the shadows and brought some colour into her lips, the bottom of the nose and around her eyes. I used a Raw Umber on a OO Script brush to deepen shadows and redraw the darker areas of the faces. The girl in the doorway has had a first layer of flesh colour and plenty of white to bring the lace of her dress to life. I’ve begun to add Raw Umber, redrawing the figure and giving it some depth in the shadows.

Finally, the architecture has been treated to some colour, with a nice Viridian filling the stripes on the ground, while Naples yellow scumbled with Foundation white over the walls behind the girls, except the interior behind the girl in the doorway who’s now flanked by a deep mustard yellow ochre.

Michael Pearce is an artist, writer, and professor of art. He is the author of "Art in the Age of Emergence."
View all posts by pearce →
This entry was posted in Bouguereau, Making work, Paintings, Priestess, Tarot-related paintings. Bookmark the permalink.