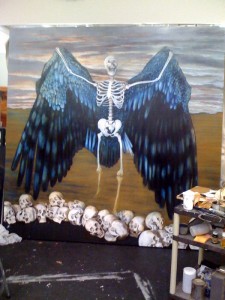 This was a particularly productive day in the studio, getting the sky much further along by adding a blended blue / grey to the higher parts of the clouds, then a rough scraping of white controlled with a soft rag. All the orange Iron Oxide is still there, but more subtle and effective.

I’ve used a Van Dyke Brown mixed with black to re-establish the details in the left wing and will continue with the right side next time I’m in the studio. At the same time I used the dark pigment to work the upper edge and left side of the wing with some linear suggestions of fine feathers. There’s too much blue in the wings at present, this will become increasingly controlled as I add more layers and detail to the feathers.

I couldn’t stand looking at the blue landscape, so I gave it a layer of Raw Sienna to turn it into something vaguely resembling a desert landscape. Wiped with rags to let some of the blue come through, making a varied surface for the next steps.

Now that the sky and wings are becoming more established it became clear that the bones of the skeleton needed to be cleaned up, so I used that same very dark brown to re-capture the shadows behind the ribs, then repainted the bones themselves with some of that nice transparent Ceramic White. I did some reading on whites this morning to find that Zinc White is not doing well in laboratory tests, becoming brittle and cracking after very short periods of time. Lead White is still the white of choice, despite its toxicity. The Ceramic is good but not as dense as old fashioned Flake White, which I’m going to continue using for my base coats, then switch to the Ceramic for the highlights. Titanium yellows a little, and doesn’t do well as a transparent white, and I hate it as a base.

Detail photos of the chest and head, the edge of the wing and a tiny piece of the sky near the horizon on the right side of the painting. 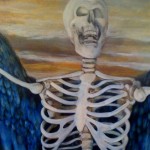 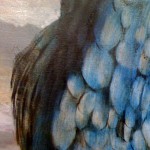 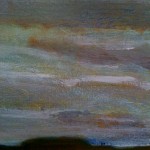