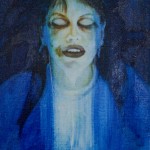 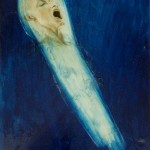 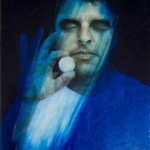 I never got round to taking good quality photographs of a few smaller paintings that I’ve always been fond of. They came at the beginning of the more mystical journey that I’ve been on for several years now, at a transition point when I was about to leave a small, rather conservative college in order to join the more liberal University I teach at now. I think that these paintings really get that sense of chrysalis, especially the self portrait holding the circle. Perhaps they’re getting my attention again now that I’m in another major transition, slowly but surely finding a new life for myself and my children.

I like the wiped away French Ultramarine blue, covering but revealing the figures underneath. It could be interpreted as disrespectful treatment of the careful work of the portrait, but it makes the painting illusory.

I’m planning to start sketching for the tall pieces later today. Justice and Temperance need attention too, and I suspect that I’m going to do away with the two figures in the foreground of Temperance, because they bother me every time I look at them. I don’t think they add anything to the image, and they make it preachy rather than offering the simple message of avoiding over-indulgence in anything. I dislike preachiness, I’d rather people figure it out for themselves.

Michael Pearce is an artist, writer, and professor of art. He is the author of "Art in the Age of Emergence."
View all posts by pearce →
This entry was posted in Making work, The Cardinal Virtues. Bookmark the permalink.

3 Responses to New images of old works, other loose ends