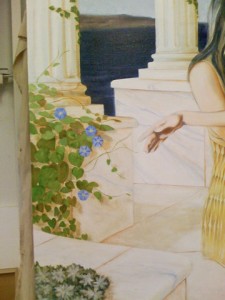 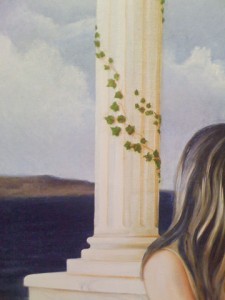 After a few days of feeling completely exhausted and running a fever I forced myself to get to the studio this evening, not achieving anything monumental, but making at least a little progress on the Empress. Because it’s been a few days of feeling crummy this was important, although I think an early night would be smart this evening, so I’ll be happy with what I got done, and continue tomorrow with a bit of rest.

I’ve added stems to the ivy on the pillars, making them complete, and added drop shadows and a little outlining in Raw Umber and Iron Oxide Red on the morning glory. I’ve put an hour or two into the Wormwood, using Raw Umber and a Cobalt Blue in the shadows of the leaves, but I’ve made it a touch too dark, Â I think, so perhaps I’ll work at lightening the plant a bit. I experimented with painting more morning glory above the absinthe, growing over the surface of the marble shelf, but wasn’t satisfied with it, although I think I’ll look at some smaller leaved creeping plants to add to this area. Perhaps some roses could creep in somewhere…

I keep thinking about the foliage in the beautiful Pre-Raphaelite painting I referenced in late September, Love and the Maiden by John Stanhope,. I’d like to achieve that same lushness in this painting – with that complexity and detail combined with his gentle palette (which comes up with too much contrast in the link).

Someone asked what they should use to make a painting: here’s what I use much of the time: 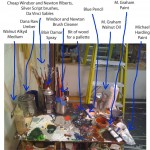 Michael Pearce is an artist, writer, and professor of art. He is the author of "Art in the Age of Emergence."
View all posts by pearce →
This entry was posted in Empress, Life, Making work, Pre-raphaelite, Tarot-related paintings. Bookmark the permalink.