My student Cameron pointed out that the lush foliage in this painting reminds him of Millais’ Ophelia, which is exhibited at the Tate National in London. It’s a beautiful painting of the drowning of Hamlet’s lover, described in poetic detail by Shakespeare in the play. 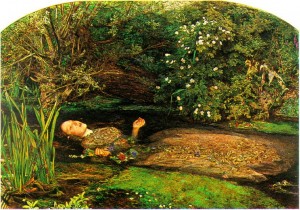 “There is a willow grows aslant a brook,
That shows his hoar leaves in the glassy stream;
Therewith fantastic garlands did she make
Of crow-flowers, nettles, daisies, and long purples
That liberal shepherds give a grosser name,
But our cold maids do dead men’s fingers call them:
There, on the pendent boughs her coronet weeds
Clambering to hang, an envious sliver broke;
When down her weedy trophies and herself
Fell in the weeping brook. Her clothes spread wide;
And, mermaid-like, awhile they bore her up:
Which time she chanted snatches of old lauds;
As one incapable of her own distress,
Or like a creature native and indued
Unto that element: but long it could not be
Till that her garments, heavy with their drink,
Pull’d the poor wretch from her melodious lay
To muddy death.”

I’ve loved this painting since my mother took me to see the pre-Raphaelite collection in the Tate when I was a child, but it hadn’t occurred to me that this might be an influence on what I’m painting now. So, looking at the detail Millais put into this work sets a standard for me to aspire to, which I think I can probably attain with some attention to getting the foliage really accurately finished and by doing a lot of hard work.

Michael Pearce is an artist, writer, and professor of art. He is the author of "Art in the Age of Emergence."
View all posts by pearce →
This entry was posted in Life, Making work, Other people's work, Sources, The Traveler. Bookmark the permalink.