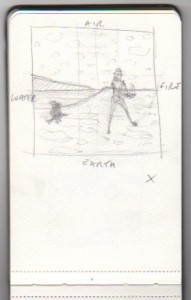 I’m planning on shooting reference photos for the next big painting on Friday, with a perfect model for the image. This time I’m working with an image that includes all four elements and a figure who is controlling and in balance with them all. I’m abandoning my earlier idea of a male and female harmoniously floating in a cosmos for a while, because I think this new image is much more in keeping with the theme of the other three pieces.

In the sketch you’ll notice a raven on the left side, and the figure of the Magician on the right holding a bowl of fire – the alchemical crucible in which all things are simplified and made pure. The puff ball clouds in the sky are similar in shape to the rocks on the ground, referring to the old principle that things in the cosmos reflect things on earth: as below, so above. A lake on the left represents water to complete the ancient group of four elements. The raven is an enigmatic character who I see as a mischief maker who wishes to confuse and mess about with the Magician’s work as he seeks to understand the mind of God by exploring the elemental composition of the universe.

Michael Pearce is an artist, writer, and professor of art. He is the author of "Art in the Age of Emergence."
View all posts by pearce →
This entry was posted in Alchemical work, Magician, Making work, Tarot-related paintings. Bookmark the permalink.