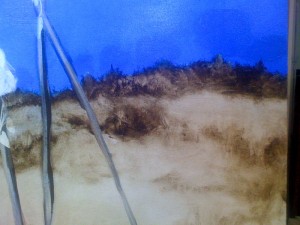 The beginning of the landscape, Raw Umber brushed and ragged. 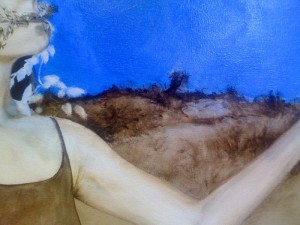 The landscape takes shape behind the shaman. The beginning of a tree trunk cuts through the horizon, soon to be developed into an old oak.

Once the blue was wiped away from the morning glory and the figures, cleaning up any overlapping colour, it was time to start work on the horizon line. I want the landscape to be a little wild and unkempt, to be reminiscent of a location somewhere on the edge of Dartmoor in South West England, or among some of those mysterious Sierra foothills in California where the oaks dot the open rolling landscape, grazed by herds of wild ponies, far-ranging cattle or sheep.

The paintings are increasingly part of a series of windows into a strange alternative world in which the people are involved in alchemical processes that alter the environment and their lives. The landscapes are becoming increasingly green and verdant, almost as if the world in the paintings is taking on a life of its own as it gets more frequently captured. I’m enjoying finding out what’s going on in there.

Michael Pearce is an artist, writer, and professor of art. He is the author of "Art in the Age of Emergence."
View all posts by pearce →
This entry was posted in Alchemical work, Britain, Emperor, Making work, Paintings, Tarot-related paintings. Bookmark the permalink.