Heading for the horizon 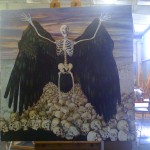 The skulls at the centre are complete, so I’ve moved to the right hand side of the painting, where I’m working my way up toward the horizon. I started putting a little shadow in the distance, leaving the most distant skulls alone in the faded white that I put on a couple of months ago; as they come closer I will add increasing detail to them to give the illusion of depth. By glazing a thin white over the top of them high in the painting and allowing this glaze to fade as it comes down the painting will add to this feeling of recession even more.

Once the entire layer of brown is complete I’ll revisit the skulls that feel shaky, touching them up and improving them with a little care, then add some warmth and coolness into the shadows and highlights. While I’m at it, I’ll extend the legs of the angel down a little further so he’s standing a touch more forward in the painting, and pay attention to the colour consistency of his rib cage, which presently appears to be very white on the right hand side, darker on the left. 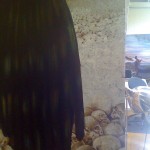 I’m still figuring out how to add to the wings. The idea of putting peacock feathers into the painting still appeals to me, so I’m considering how they would work. I’d like to see the wings become more flamboyant.

Meanwhile, I’m trying to get over this jet-lag – I’m not sleeping properly, waking up very early in the morning, unable to get back to sleep, then feeling extremely tired in the afternoon. It’s making me feel quite antisocial. In addition, it’s been difficult to find the right times to paint, because there’s nothing like weariness to make my painting go bad. Why would I find it so easy traveling East, and so difficult going West? Wah wah wah…