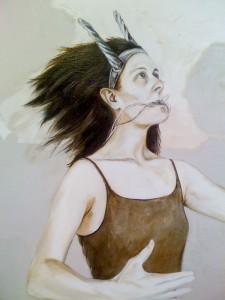 The Emperor is completely painted in Raw Umber, but I’m not entirely satisfied with his feet, which are not as dynamic as I’d like. However, I expect vines to wrap around them, so it may not be necessary to get too detailed. I’ll leave them for now until the demands of the composition become more clear.

The Â woman in this painting is based on the shaman found on the Gundestrup cauldron, but in addition to the characteristics of that figure a Green Woman’s vines have begun to emerge from her mouth to cascade around her. When leaves are added to the vines they’ll be complemented by the bright colours of morning glory flowers. She’s becoming the personification of nature.

Head-dress horns have appeared on a strap tied around her head, while her hair has become more substantial and detailed, with variations in direction and light and darkness.

Like everything else in the painting she’s painted in Raw Umber over the top of a layer of greys created by mixing Raw Umber and Foundation White. It’s been extremely satisfying work, mixing my love of ancient British folklore with studio painting.

Michael Pearce is an artist, writer, and professor of art. He is the author of "Art in the Age of Emergence."
View all posts by pearce →
This entry was posted in Britain, Emperor, Folklore, Green men, Making work, Tarot-related paintings. Bookmark the permalink.