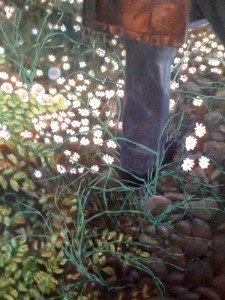 Somehow the morning slipped away incredibly fast, and I only got this terre verte over the grey grass and the first layer of three dandelions done. I enjoyed the dandelions – a nice soft grey first, thin and wispy, then a centre of raw sienna (with a tiny bit of Van Dyke Brown to darken it) smudged on with my finger. Next I used a striping brush to begin the fine lines that will sit beneath the next layer of pure feathery white about the outside of the sphere. You can see one of them in the photo on the left side.

I fixed the hemmed edge of the leather coat where the new grey layer borders the dagger, putting a slight curve into the previously dead straight line of the jacket. I’ll need to repaint the landscape of the far away bay coastline later where I used some grey to cut into the previous layer.

I have other obligations this afternoon, so I hope to get back into Â the studio this evening. Even so, the grass looks good, needing only a layer of yellow / green to complete it. 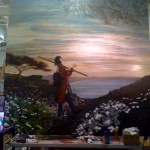