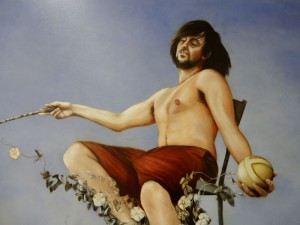 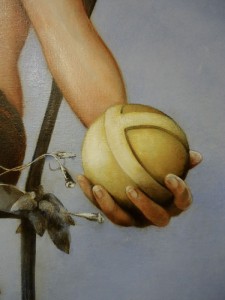 It’s so good to start adding layers of colour into the painting after this long period of working in browns as the plants and bodies take shape.

The Emperor is looking increasingly complete with every additional layer of colour subtly building the illusion of substantial flesh.Â The globus cruciger, symbol of the Emperor’s authority, has solidified into a spherical ball now that it has some colour and highlighting. I’ve painted some pale green and pinkish grey onto the stick he’s holding in his other hand. The stick is his sceptre, here suspending the moon which he dangles over the Empress, suggesting that he has power over her too – but the plants she’s directing up his chair will soon take care of his arrogance.