As the crow flies xi

Getting ready for the big October, my son and I went to the studio today and laid down the size and gold leafed a couple of tables full of foot square panels, leaving three times as much area to gild remaining. I’m going to be working my behind off to get the whole project finished in time. My student Cameron dropped into the studio to say “Hi” and was immediately drafted as a willing helper, thanks goodness, because it took two hours to gild those panels.Â

I didn’t bother putting any red primer onto the panels, because I don’t want the red to dominate everywhere on the panels, so instead I’m going to put a more controllable glaze of reds over the top so that there’s a gradual fade of reds from the highest hung birds to the lower ones. I have several gallons of various red pigmented oil paints that I purchased long ago, so this seems like an ideal opportunity to use some of them. The nigredo represented by the black crows is the first stage of the alchemical work. It seems appropriate that they should ascend towards the red, which will blend down from the highest of the panels, because red is the colour of the final stage, the rubedo, before the creation of the stone. 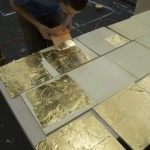 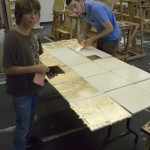 Ethan and Cameron helped lay down the gold leaf. It’s a fiddly process, but fairly straightforward when you get the hang of it. I’m not particularly looking for total perfection, which helps a lot.Â

Michael Pearce is an artist, writer, and professor of art. He is the author of "Art in the Age of Emergence."
View all posts by pearce →
This entry was posted in Alchemical work, As the crow flies, Black birds, Making work and tagged gold. Bookmark the permalink.