I enjoyed camping with my son for the weekend, striking camp early this morning and returning to the studio after running a mile and an abbreviated yoga practice. My colleague Terry Spehar-Fahey showed up and began work on a new painting, which was wonderful, first because she works very quickly and beautifully, particularly inspiring at a time when I feel a little slow. I spent a few hours cleaning and tidying the studio, mostly procrastination if I’m really honest about it, but it really is good to be in an organized space. This afternoon I got to work on the en grisaille layer of the maiden, a little roughed in right now, but easily tweaked later to correct small discrepancies. In a prolonged session of repeated priming I also put down several layers of red gesso for the gold circle upon which she will stand, identifying her as one of the group of virtues in the tarot. 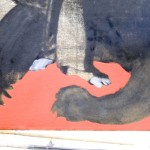 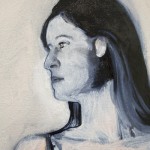 I see the image of Fortitude as an allegory that recommends keeping under control the things which will harm us without being distracted from the true goal of our life. The young woman pays attention to what is happening before her, while simultaneously holding the jaws of the beast, clearly a force that would dominate her if she were not focused on her true objective. As an angelic force, like the figures of Temperance, Prudence and Justice, she is a messenger between the heavens and the earth, bringing divine guidance to us.

Michael Pearce is an artist, writer, and professor of art. He is the author of "Art in the Age of Emergence."
View all posts by pearce →
This entry was posted in Exhibits, Fortitude, Life, Making work, Openings, Other people's work, Tarot-related paintings, The Cardinal Virtues. Bookmark the permalink.