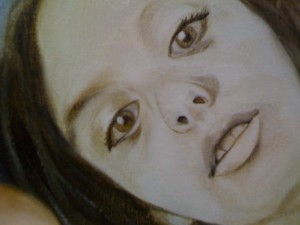 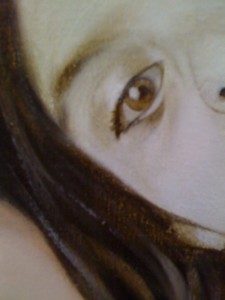 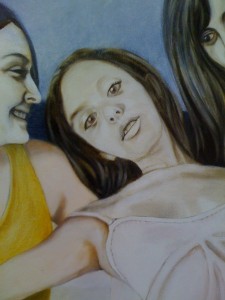 I’ve finished the first draft of the Empress’ most recent face, now painting my daughter in the role of the main character, (she got a crick in her neck from keeping her head in that position while I tried to match her head to the position of the painting). Re-working the head has been a tricky project, but it’s paying off, and I think this is a better choice for the painting because the first face was positioned poorly, with a strange expression while the second, although very pretty,Â was simply incorrectly positioned and didn’t fit the composition.

I painted the face in wet white, the Pre-Raphaelite technique of painting the flesh into a wet foundation. My preference is to emphasize shadows once this layer has dried. It’s not unlike painting a velatura layer when working on an en grisaille painting, but it tends toward a softer value over the whole face. You can see the slight difference between the colour of the faces in the third phot0, which shows the neighboring girls alongside the newly painted Empress.

This is the first draft, so expect some changes to come, with the addition of hair, shadows and eyebrows (!).

Michael Pearce is an artist, writer, and professor of art. He is the author of "Art in the Age of Emergence."
View all posts by pearce →
This entry was posted in Empress, Making work, Pre-raphaelite, Tarot-related paintings, The Cardinal Virtues. Bookmark the permalink.