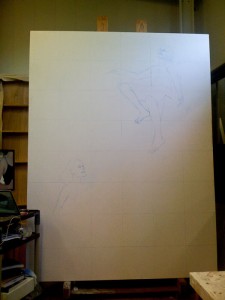 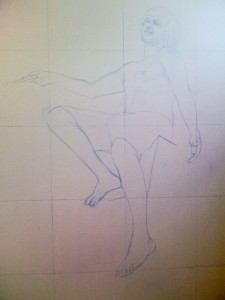 Aaron as the Emperor

At last I can get started on the Emperor – the canvas has been ready to go for a few days, but there has been too much excitement around the New Romantic Figure exhibit. This morning a photographer from the Star came to take pictures at the exhibit, so I’m interested to see how the story turns out.

After shooting reference photos of my neighbor Amy as the yogi in the foreground I started drawing the image of the two figures onto the canvas in blue, placing key points of the bodies on golden section nodes to find balance in the composition. Once I have the chair drawn I’ll be able to add the vines that come out of the woman’s mouth, cascading on the ground around her and growing up the chair legs, wrapping around the Emperor’s legs. It’s a neat allegory of the triumph of natural grace and beauty over material power and domination.

Michael Pearce is an artist, writer, and professor of art. He is the author of "Art in the Age of Emergence."
View all posts by pearce →
This entry was posted in Emperor, Folklore, Green men, Making work, Paintings, Tarot-related paintings. Bookmark the permalink.