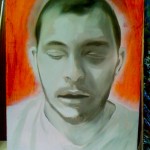 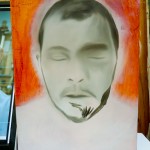 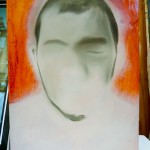 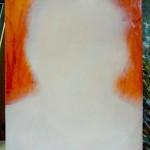 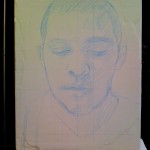 Based on what I saw in Birmingham (see this earlier post) Iâ€™m using a variation on Rossettiâ€™s version of the famous Pre-Raphaelite wet white technique to create a study of Joeâ€™s head as the first of a group of paintings that I imagine as a part of a large solo show in a yearâ€™s time. I managed to remember to take photos at intervals to show how the Raw Umber blends with the wet Foundation layer to create a soft but bright grisaille. First picture, the sketch in blue pencil over a smooth gesso ground, sealed with Iron Oxide Red. Next a soft layer of Foundation WhiteÂ covers the drawingÂ (hereâ€™s my variation from Rossetti, who used Zinc Oxide, which is notorious for cracking up fairly quickly, so I prefer Michael Hardingâ€™s Foundation White â€“ a mixture of Lead and Titanium), pounced to a smooth, Â texture-free layer, thin enough to let the drawing peek through. After that itâ€™s a matter of building the shapes of the shadows, then adding planes of more opaque white to brighten highlights. In later layers Iâ€™ll refine the features more thoroughly, clarifying details and getting things increasingly accurate.

Iâ€™m interested in the idea that mythological characters from folklore are sleeping, biding their time until a new age of smaller communities takes shape. I imagine these characters â€“ the Green Man, Merlin, King Arthur and Queen Guinevere, the Fool and others from the Golden Bough in hibernation, but definitely not dead. Perhaps Iâ€™ll end up with a large-scale painting of aÂ sleepingÂ Arthur as my version of the tarot Emperor, emulating Burne-Jones. Iâ€™m faced with the challenge of painting these ancient archetypes in a contemporary mode, avoiding simply copying the work of the nineteenth century and finding an approach that is truly millennial.

I like the romantic vision of aesthetic Victorians like the Pre-Raphaelites and William Morris, whose Arts and Crafts movement was a reaction against mass-production, and Iâ€™d like to encourage the same kind of reaction against the mass produced television culture of the 21st Century. Itâ€™s paradoxical that the internet is the means to find the broad community of people who enjoy similar ideas and that electronic technology provides indispensible working tools in the studio and, isnâ€™t it?

Michael Pearce is an artist, writer, and professor of art. He is the author of "Art in the Age of Emergence."
View all posts by pearce →
This entry was posted in Folklore, Green men, Making work, Other people's work, Pre-raphaelite, Sources. Bookmark the permalink.